In early 1950, Episcopalians in the Winter Garden area had no local Episcopal church. The nearest were St. Matthias in Clermont or Holy Spirit in Apopka. Dissatisfied with this situation, Betty (Mrs. George M.) Barley and Dorothy (Mrs. Hearn) Ficquette contacted the Diocese of South Florida to request approval for a new Episcopal mission in Winter Garden. After due consideration their request was approved, and the Church of the Messiah was born. The Rev. George L. Granger of St. Matthias led our first service on Sept. 17, 1950, renting Winter Garden’s American Legion Hall for the grand occasion. 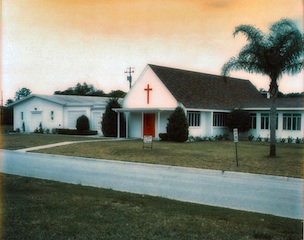 Messiah’s fledgling congregation then met in various locations around Winter Garden before finally constructing the first church building in 1954. Located at the corner of Woodland and Tilden Streets, it remains there to this day, though greatly improved and enlarged. A meeting hall was added in 1963, an educational building in 1975, and in 1985 the original sanctuary was substantially enlarged. Our most recent addition is a beautiful parish hall/office complex to the west of the original buildings, completed in 2008.

Since its founding, Messiah has been led by a number of fine clergy. Our current rector, the Rev. Thomas H. Rutherford, is our longest serving rector, becoming Messiah’s rector in August 1996.

Church of the Messiah became a self-sustaining parish in 1972, and today has a annual budget of $700,000 and an average Sunday attendance of around 300. Messiah offers four services each Sunday, ranging in style from very traditional to completely contemporary, as well as a mid-week service. Our preschool, Children of the Messiah, began on-site in August 1999 and has grown with the passing years.

Messiah has served the people of Winter Garden and west Orange County for well over 60 years now. Future plans contemplate the addition of a new educational complex and prayer garden within the next decade.

While the Winter Garden area has changed a great deal since 1950, Messiah’s mission has not. We seek now, as ever, to “change the world with Jesus: one child, one person, one family, one community at a time.”

Join Us For An Upcoming Worship Service

Join Us for Our 70th Birthday Celebration

If you, or someone you know would like to have items from our food pantry OR you have donations, please come Monday- Friday from 9-5.  If you prefer to have a bag brought out to you, call the office, or let us know when you come through for communion.

You have the option to give once, or set up a recurring contribution.

Catch up on our Sermons!